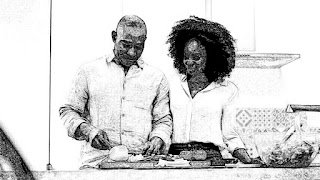 The last time I saw him...we were sharing a pot of spicy chili that he had made. This was the first time, in all the years that we had known each other, that he had stepped into my sanctuary and cooked for me. This was a big surprise. Out of the blue I get a call...GG what are you doing today? GG that's what he calls me. The first and only one I allow to call me that. That was my his name for me and no other lips could ever say it quite the way he did. I'm recalling now, I rarely called him by his first name...it was always by his last name. I don't know why, I think I just loved the sound of it. Or perhaps I was secretly hoping that one day I would be putting my first name in front of it.

Back to the meal. I sat at the table while he chopped, diced, sliced and explained why each ingredient was important. Each one had its purpose to make the perfect pot of deliciousness. It was perfect for a cool afternoon. Just like him...he was perfect for me. We listened to music, talked about world events, past times and even the future. He said that one day he would buy me that house in the country with the land where I could grow a nice garden. That's after he won the lottery of course. He always said that no matter where he was, if he hit that number, he would take care of the people he loved the most, which included me and my kids. I believed him. I saw the sincerity in his eyes and hung on to the promises in his voice. One thing I was never clear on, even though he had said he loved me...I didn't know exactly where I fit into his life. Our relationship was so sporadic that I wasn't really sure. But one thing I was sure of is that I loved....no correction, love this man like I have never loved another. I'm not sure I can ever love like that again...the shit hurts. I miss him.

she calls you my mr. big

perhaps in that there's some truth

seems no matter how far

our paths may stretch

the road leads back to you

because their thoughts weren't provoking enough

their eyes the right shade of brown

they didn't appreciate the melodies of miles and monk

nor the words of kahlil gibran

the songs they sang were out of tune

and beauty their lenses captured not

their palettes had not been laced with exotic treats

nor quenched with the best muscat

their dress was full of vanity

and their political views were few

their dance was a little too perfect

and i was usually left not knowing what to do

yes she calls you my mr. big

but i must disagree and say no

cause my name is not carrie

and you're not a millionaire

plus this is real life, not HBO

so although all the others

weren't the perfect vision of you

at least i knew where i stood...

i could never say the same for you